An ultimate Bucket list item which I was lucky enough to be able to tick off at such a young age. An African Safari at Mikumi National Park is never going to disappoint. If you want to find out about one of the smaller, least visited national parks in Tanzania have a read of this. While learning about my lovely experience! though it was dampened by me being very sick, it was still a beauty!

Why did I go to Mikumi National Park?

I visited the Mikumi National Park for 2 days in July 2014, after my time spent volunteering in and around the town of Mpwapwa, with a team from my school. (You can read the blog post here). Visiting to allow us to have the chance to wind down and reflect on the experience we had for the past few weeks. It was truly beautiful and I feel so lucky to have had the chance to stay in the National Park for 2 nights, where we stayed at the Mikumi Wildlife Camp. An African safari is something everyone should have the chance to experience in their life; nothing will ever beat seeing wild and free animals in their natural environment.

Mikumi National Park is the fourth largest national park in Tanzania, covering an area of 3,230 sqm. It’s also the closest to Dar es Salaam (the previous capital city) which can be reached in about 4-5 hours by car. Visitors come year round to see the wildlife. It is recommended to visit in the dry season between May and November. You can find some more information on the Tanzania Tourism page.

The landscape of Mikumi national park is savannah covered in baobab, acacia and tamarind trees. With mountains surrounding the whole park, everywhere you look, you will see something amazing. The plains of Mikumi are often compared to that of the famous Serengeti National Park, which also in Tanzania. Mikumi makes a great option to visit if you have limited time, as the park is small, close to the city and full of animals!

At Mikumi you have the chance to see 4 out of ‘the big 5’, being Elephants, Buffalo, Lions and Leopards. They’re just missing Rhinos, so if you want to see Rhino you can find them at the Serengeti National Park, which is about a 16 hour drive from Dar es Salaam, or a 3 hour flight with a stopover. This is why Mikumi makes a good choice if you are limited on time. You can never guarantee seeing all animals at a national park anyway, nature does what it wants!

Within a few hours of being on our first safari tour we had seen most of the animals that live in the park. We saw Giraffe, Elephants, Buffaloes, Zebras, Impala, Baboons, Wildebeests, different species of birds, hippo and crocodile.

Getting to see a Giraffe up close, look at that print!

Hippos chilling in their pool.

I remember we was standing up with the roof open in the jeep, the sun was setting and we were watching a herd of elephants cross the track. I felt so lucky to be there in that moment, it was definitely one of the most beautiful things I’ve seen in my life so far.

As we didn’t see any lions the first day, the second day was tasked to track down some. It took a few hours to find them, the group found 2 males laying in the sun, literally a metre away from the jeep. I wish I had been there! But sadly I wasn’t able to go on that drive, as I was unwell and didn’t think it was a good idea to get into a hot bumpy jeep (about to puke).. no matter how much I love animals I couldn’t force myself.

We also didn’t get to see any leopards, even though I was constantly looking in the trees for some. But it’s nature and you never know what can happen, it’s all based on luck! I spent that afternoon relaxing in the bar and lounge area, watching animals pass the camp, and chasing geckos around the bar. The fact that I didn’t get to see the lions or leopards gives me a good reason to go back to an African national park, and get to experience this all again.

Sleepy lion, photo taken by friend who I gave my camera to.

The Mikumi Wildlife camp was beautiful! The accommodation was mostly open air, no glazing just mesh over the openings, with a connecting terrace to the room next door. The rooms are made mostly of concrete so it helps to keep you cool at night. Though if you’re a light sleeper maybe bring some ear plugs, as you’re right in nature, having no glazing means you can hear all the many bugs and other animals in the night!

One of the bedrooms, and shared terrace area.

The communal space is completely open air with a bar, fire pit, dining area and lots of places to sit watching the wildlife go by. There’s a watering hole nearby so regularly you can see animals stopping for a drink. We were told that elephants come right into the camp, and occasionally a lion sometimes! There’s also a swimming pool which looks over the park and also a small gift shop. The guy who owns the complex and all the staff were super nice and made sure everyone was happy and cared for. (I mean they were cool when I started throwing up at dinner in their beautiful camp and had to run to my room.. too much information).

Dining space at Mikumi Wildlife Camp (could be a lion out there).

I’m unsure of the price we paid for our stay at the wildlife camp as I was not involved in organising. I don’t know whether we got a discount due to there being a big group of us. I have a feeling we paid about £80 a night per person, from what I remember. You can have a look at the Mikumi Wildlife Camp website and enquire rates there. But I’m sure I could not afford to stay here if I was planning my own trip, seems like something out of my budget! It was definitely the nicest place I have ever stayed at! So I’m very lucky I got the chance to actually stay in the park and see animals so close by.

The bedrooms are a small walk away from the communal area where everyone has dinner and hangs out. Each time you leave your room you have to wait for a Maasai warrior to escort you to and from, obviously because there is no protection from the wildlife and they are free to roam around the park and camp. The Maasai are there to protect the people and also the animals.

Metres away from another herd of Elephants.

The food was great and there are lots of things to eat and drink. You can also order food through the day, though it takes a while to be cooked. Our group made up about half of the guests. So it felt really exclusive as there only seemed to be about 20 guests at a time. In our group we would eat dinner together outside, around a massive table full of candles, under the stars and moon, it was so beautiful!

The team with our amazing drivers, sad to be leaving but having had made beautiful memories!

When leaving the park to head to the airport we made a short stop at a snake park. Which I researched after the trip, it is part of Genesis Hotel, which is just outside the national park. We saw many snakes native to Tanzania. They also have crocodiles and tortoises. I held a Python which was starting to tighten its grip around my neck! But looking back I would have not been happy with the ethics of the place. The staff were poking the snakes to get them to move, which there wasn’t really any need for.

I would really recommend Mikumi National Park! Our team had a fantastic time seeing beautiful, wild animals. I have nothing to compare this park too but I can assure you it’s worth the visit. Though If you have limited time you can get the chance so see some of the big 5 here. I hope everyone gets the chance at some point in their life to go on Safari! While I’m dreaming of going back!

Previous to this trip we spent time volunteering with communities in rural Tanzania. You can read my posy here Community Volunteering in Tanzania 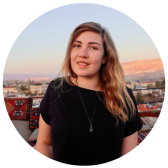